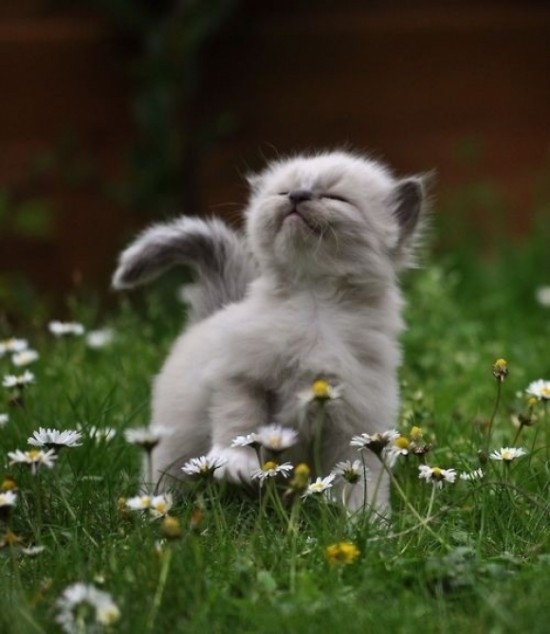 I seriously just watched Tom Jones belt this out on YouTube. Gosh he drove the ladies wild! My Dad would often come in from the farm when I was a little girl and ask/sing me this question. I’d giggle and say “Go on, sing it Dad” and by the time I’d climbed up on his knee at the kitchen table he’d have sung a few bars and then he’d stop and say “So what is new pussy cat?” Of course I thought the song was all about a pussy cat.

So I’m sitting here smiling as I type thinking about my beautiful Dad all because I was trying to think of a title for this blog post other than “Another me update” because that sounds a little boring and things have been far from boring. That’s why I haven’t visited my little internet home for a bit. And now I also have an excuse to search for cute cat pics to go with this post. Win!

FYI it has been raining cats and dogs here today at the base of the foothills to the Great Dividing Range in Gippsland. Certainly foiled my plan of spending the day outside in the garden again, but as a farmer’s daughter and a farmer’s wife (although not a practising farmer’s wife, kind of like a non-practising catholic, but not) you never ever knock back the rain.

So, what is  new pussy cat?

Well Doug, also known as the Wheelchair Bandit, has been having some skin cancers removed (not nasty but need to be dealt with before the little suckers turn mean) so this has meant some driving to appointments and treatments and some nurturing love and attention by me that I told him not to get too used to. Not a pleasant experience having skin cancers removed or treated with light therapy so heed this warning and cover up in your younger years.

It’s interesting to note that the Bandit’s skin damage is mostly from the skin exposure where he rolled his worked shirts up to his elbows, the V on his chest where the work shirt was left unbuttoned (don’t know why he was trying to impress sheep and cows) and on his temples and around his eyes from not wearing a hat. Years ago, sitting on a tractor with no cabin, that’s just what you did. So if you don’t want to pay for it thirty plus years down the track COVER UP. Just sayin’.

After that little episode (that is not over yet, still more pencilled in the diary) he decided the nurturing love and attention wasn’t half bad so threw in a touch of Pneumonia and a five day hospital stay to hopefully extend the “hopelessly devoted to you” moments for a tad longer. We worked out this is his 6th Pneumonia in a little over four years. The down side to being wheelchair bound, on immune suppressive drugs and years of immobility I guess. He is amazing… I don’t know how he does it. Always so calm.

Doug calls himself “Metal Man”, MM for short, because he has one artificial knee, two artificial hips, left artificial elbow, partly replaced left shoulder, knuckles replaced in his left hand due to chronic Rheumatoid Arthritis and a metal artificial aortic heart valve. Oh, and just to mix things up he has a lump of concrete for his right knee due to an infection that invaded his knee replacement so it had to be removed and his bone strength was too weak to insert another knee down the track.

He’s known as many things: Metal Man, The Wheelchair Bandit, our very own battery operated ‘Garden Gnome’ and ‘You Cheeky Bastard’. I’ve told him he can have as many aliases as he likes but I draw the line at him wearing his undies on the outside of his pants. Even if we do think he is our superhero.

So in-between all of these shenanigans I’ve been loving getting dirty in the garden (when it hasn’t been raining) and trying to keep in touch and up to date with loved ones. To my bloggy pals, I have been reading along and have enjoyed very much all the posts and pics about the ProBlogger Conference on the Gold Coast earlier this month. I’ve learned so much from all the generous sharing.

Oh… are you ready for this one… I’ve had NO FAILS in the kitchen this week! I know! Epic right?

Ooooh AND I even made it to the gym tonight! Anyone would be almost fooled into thinking I had my shit together! Hahaha (breath) I laughed so hard at that one…. I’m so funny! Yeah that’s so likely to happen.

Sorry nothing of value much in today’s mind dump. Other than if you google “How to accept life and just get on with it” my husband’s name and number will probably pop up as credible source. He never ceases to astound me.

And of course you are now going to have that song stuck in your head for the next 24 hours… your welcome!

So, what’s new with you pussy cat’s?